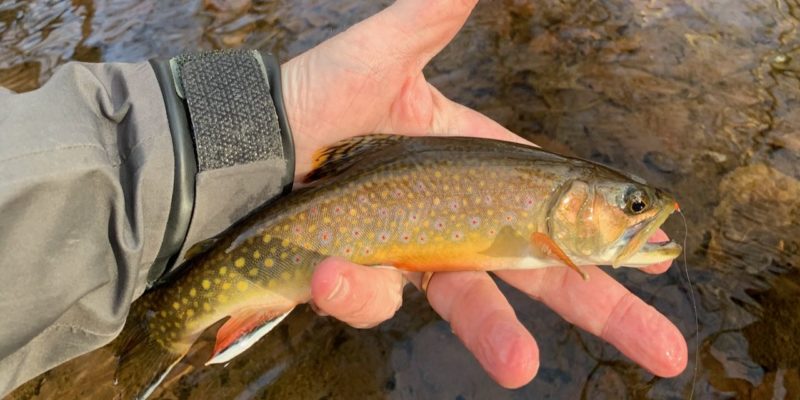 The weather report said 60 degrees and clear and I didn’t have any pressing obligations, so I grabbed my gear and headed to Skidmore Fork to see if I could scare up a brookie or two.

Side note, I actually left my rods at home and only realized it when I was three quarter of the way to the water. My patient and understanding wife was kind enough to meet me half way and bring me my rods…

I hit the water about 12:30 p.m., starting at a hole not too far from the parking area. And sure enough there were a couple of fish ready to pound a nymph.

I had a couple of places on the stream I wanted to fish so I moved on, hitting likely pools as I went along. In some spots I was a bit surprised that I didn’t move any fish but I didn’t switch flies or tactics, being content with the occasional take. If fact, I managed to fish the same two flies and rig all day.

The first place I wanted to see was upstream aways so I jumped out and went up the fire road to see how good my memory was. It had been a couple years since I been to that spot.

Surprisingly, my first shot landed me 20 yards above where I wanted. But it was quick work to get there.

I managed to miss a nice fish in a small back eddy, that took a whack at the dry just as it landed. I fished up from there, with little action for the effort.

My final destination was just above the second ford. Years ago I had been fishing with a good friend. As I recall, it had been a bit frustrating of an outing. Rising fish but spooky. Pre tenkara, which made it worse.

As we were scouting the run, a nice fish rose in a tricky spot under some overhanging limbs. My friend fired a picture perfect cast, got a good drift and landed a the fish. It was one of those experiences that keeps you coming back.

I was thinking of that day, as it was my friend’s birthday the next day and I wanted a fish to commemorate the memory and his birthday.

Sometimes you get lucky… 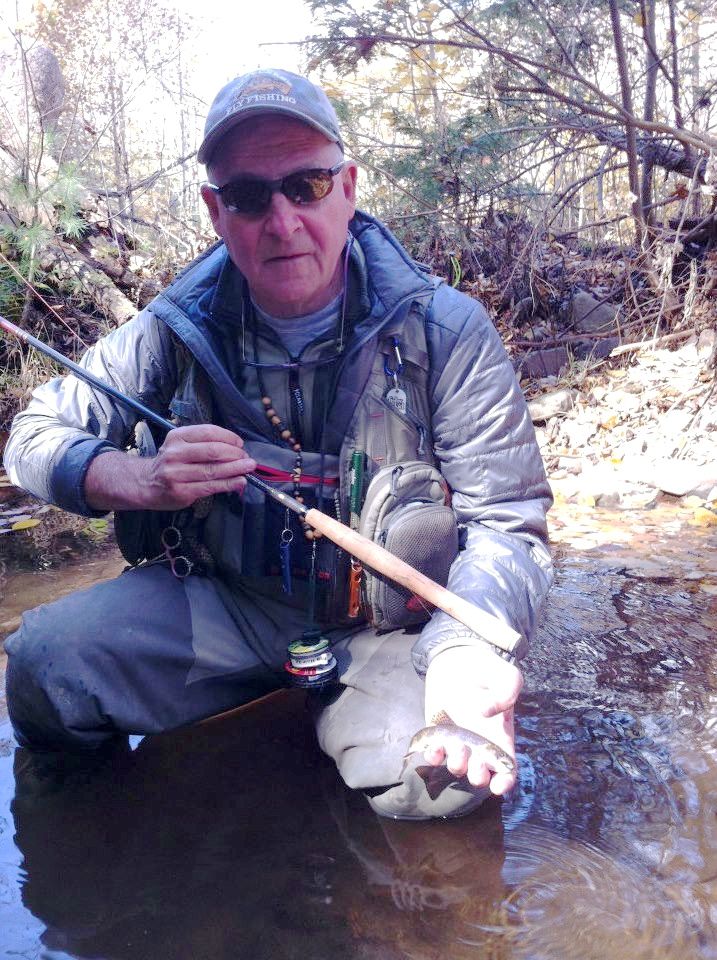 In part 1, I wrote that I would be sharing some notes on five of my favorite tenkara streams. All are public water, three in the George Washington National Forest, and two in the Shenandoah National Park. This is the second stream in the series, Skidmore Fork

Skidmore Fork is a tributary of Dry River that flows into and out of Switzer Lake. The section below the lake is the easiest to get to and fish so that is what I will focus on.

Skidmore Fork is easy to reach. From Harrisonburg, Va. take 33 west about 18 miles to a moderate sized parking area on your left. If you start-up the hill you went to far. Just as you enter the parking area you will see a gated road on your right. Park your car and follow that gated road around to the first ford on Skidmore Fork.

Skidmore is a soft gradient stream with the typical pools, riffles and runs. You can fish up from this first ford all the way to the base of Switzer Lake or down to where Skidmore meets Dry River. If you fish up, a logging road runs along the stream and makes access and egress very easy. The logging road crosses the stream four times before it gets to Switzer Lake.

Skidmore does not offer the wide open casting that you will find on Ramsey’s Draft or the Dry River but is still easily fished with an 11’ Iwana.

Here, like Ramsey’s draft, a dry or dry-dropper rig works well; either Adams or BWO parachutes. For nymphs try a Pheasant Tail, Gold Ribbed Hare’s ear or Copper John. A few Quill Gordons, March Browns and Sulfurs for mayfly imitations; little black stoneflies, yellow sallies and some tan and olive caddis round out the assortment. Of course if you want to go the full tenkara route then try an Oki or Ishigaki. Check with Mossy Creek Fly Fishing to get the latest on what’s working.

Daniel gets his tamo wet!

Skidmore can easily occupy a full day of fishing, offering plenty of variety to keep you entertained the entire time. By the way, on your way to Skidmore you will be driving along the Dry River, which is also an excellent brook trout stream. No one would blame you if you yielded to temptation and stopped at the many pull-offs along the way to give the Dry a try.

If you go let me know what you think.