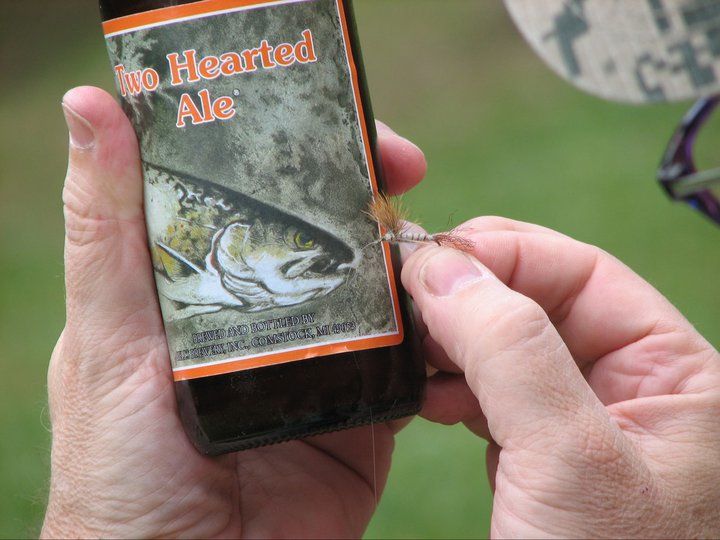 A question recently posted in the Tenkara Anglers facebook group asked about the single fly tenkara technique. The author of the post was looking for advice, reassurance and information about the technique, especially around selective trout and it got me thinking about my own views of the single fly aspect of tenkara.

one fly to rule them all

I admit to a pretty strong addition to catching fish on the surface. So I have been both skeptical and practical when it comes to the single fly technique. Fishing dry flies with a tenkara rod was so effective and fun that I was hard pressed to try something different. In fact if I can’t entice a fish to take a dry or dry/dropper, I usually just call it a day, scout out the water or go for a hike.

When Daniel Galhardo, founder and owner of Tenkara USA was in town I had the chance to fish the single fly method with him. After three days with increasing success I can say with confidence that it works. As a guide who specializes in the tenkara method it was especially rewarding to get first-hand coaching on tenkara fishing.

In the course of three days we had a lot of time to talk about our evolution as tenkara anglers. We shared similar paths to where we are as tenkara anglers today. So when I read Daniel’s response to the facebook question, I was struck by what a well worded insight into the single fly technique it was.

“Main thing to keep in mind is that you should know (or maybe believe) that it can be about technique as opposed to the fly choice. I have been in a few rivers where people told me I had to match the hatch at particular times, but I have also been stubborn in my pursuit of catching fish without paying much attention to the fly and have done well (and have started doing progressively better as I have gained confidence).

I have come to believe I can fish anywhere, including highly pressured waters, without paying attention to my fly. It is refreshing and liberating (this is my favorite part of it). Now, it is possible that I could have caught more fish if I had changed flies…will never know.

I think it mainly comes down to one thing: what do you want most? To think about the flies you’re using and trying to possibly catch more fish? Or, to have the freedom to not catch as many fish now, instead just keep casting that one fly to the water, and perhaps in a year, or two, or ten, feel that you have mastered techniques that allow you to fish one fly effectively?

There is NO right or wrong here. Absolutely not. It is all about what you desire. I really enjoy not having to think about my fly, and I now feel liberated to fly anywhere in the country and fish with my one box of flies. I like that.”

I won’t be abandoning my dry flies for just sakasa kebari, but I will be trying the single fly technique more often.

When Tenkara USA founder, Daniel Galhardo was in town we had a chance to hang out, fish and talk tenkara.

Meeting up with sensei Galhardo

That afternoon we took a group of avid tenkara anglers to Mossy Creek for a hands-on clinic.

Fred was the first to land a fish

A rainbow is landed

In the video, Daniel and Brian see a fish rise and start stalking it. Just as Daniel is set to cast, another fish rises and he turns his attention to that fish. He uses the “pause and drift” method to catch the fish. You will also see how he handles landing a large fish. Daniel fished a T-USA Ito, about 15ft of 3.5 level line, 4ft of 5x tippet and a Ishigaki Kebari.

Brian and I wanted to learn more about the “one fly” practice that Daniel and the tenkara anglers in Japan embrace so after our guests left, Daniel, Brian and I did some fishing on our own. Brian and I had committed to Daniel that we would only fish this way when we fished together. We took the opportunity of Daniel’s coaching to become more skilled in the tenkara style of fly-fishing.

At one point, while doing a downstream “pause and drift”, a fish bit the lilian on my tenkara rod. I was so shocked I jumped back screaming and fell down laughing like a fool. After breaking off a 20″ rainbow because I was to slow to move despite Brian and Daniel telling me to…

I at least found redemption with a nice brown a few casts later.

After a day on the Valley spring creeks we headed up to the George Washington National Forest to fish for brook. We fished only tenkara flies on level lines using tenkara techniques.

I will confess to being somewhat skeptical of the “one-fly” method but after three days with increasing success I can say with confidence that it works. As a guide who specializes in the tenkara method it was especially rewarding to get first-hand coaching on tenkara fishing.

Editor’s Note: My friend Ben Bulis, who is running the American Fly Fishing Trade Association, wrote about his recent adventure with a tenkara rod. I asked if he would let me use it as a guest post on Dispatches. He agreed. Enjoy.

Are You Ten-kurious? I was, and I tried it! Tenkara… What is it? Tenkara (translated: “from the skies” or “from the heavens”) is the traditional method (no reel) of Japanese fly-fishing used by commercial fishermen in the mountains of Japan to catch Yamame, Iwana and Yamago. Tenkara originated in Japan more than 200 years ago, the rods, originally were made of long bamboo/cane poles.

Tenkara has been making it’s emergence in the U.S. market since 2009, thanks to Daniel Galhardo, owner of San Francisco based Tenkara U.S.A. Temple Fork Outfitters recently announced they too would be manufacturing a Tenkara rod and RIO now offers a Tenkara line.

I’ll be totally honest; I was more than a little skeptical about fishing without a reel! I have to say, I really have been enjoying the simple approach to fishing, and its effectiveness has made me a believer, Tenkara is here to stay. Learning a new method of fishing and pushing the limits on the size of fish I can catch, is what I like about it! With that being said, Tenkara, will never be able to replace my assortment of rods and reels, it’s just another tool in my quiver.

Tenkara, with its simple approach and ease will in my mind, be a gateway to introduce non-anglers children and adults, to the sport of fly-fishing. Anyone can cast a Tenkara rod effectively in less than 10 minutes! Both of my young children have picked up my Tenkara rod and have caught fish within 15 minutes on the river.

If you have the Tenkara itch, go ahead and scratch it! 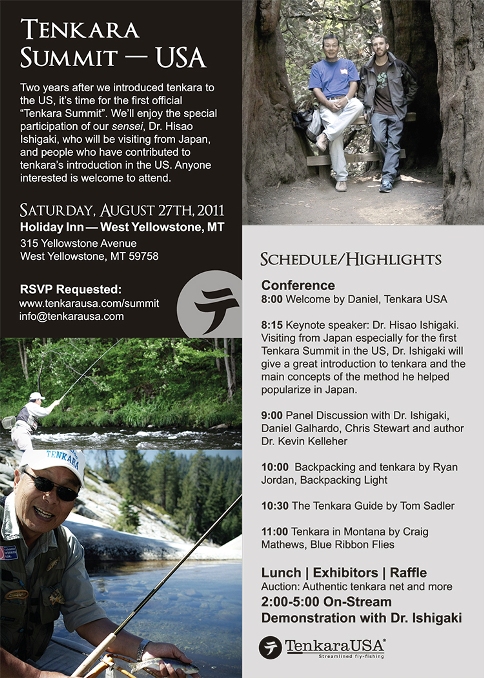 Last month I traveled to West Yellowstone, MT for the first Tenkara Summit. More than 100 hundred people showed up to hear presentations, talk tenkara and see an on-stream demonstration.

Here is part of the write up by Daniel Galhardo on the Tenkara USA blog:

Originally we had expected, optimistically, that about 70 people would show up. The conference room was setup to accomodate 100 people, but that was not enough. Over 100 people showed up yesterday. People came from 23 different states, and from 3 different countries specially for the Summit (well, they did come to fish in Montana…). I’d really like to thank all those who came and helped make this an extraordinary event; it was the best crowd ever. Thank you!

The Tenkara Summit had the presence of special guests Dr. Hisao Ishigaki, the leading authority on tenkara in Japan; Chris Stewart of tenkarabum.com; Craig Mathews of Blue Ribbon Flies who gave a very passionate presentation about tenkara in Montana and showed some great clips of large fishing being caught; Ryan Jordan of backpackinglight.com as well as ryanjordan.com; and Tom Sadler who spoke about the advantages of using tenkara as a guide and as a way to introduce new people to fly-fishing so they can continue conserving the environment in the future.

Dr. Ishigaki is known as the “Tenkara King” in Japan. His presentation was a wonderful insight into the world of tenkara. He is a warm and charming story teller lacing his presentation with witty anecdotes of his tenkara exploits.

It was a special honor to part of the summit and to learn from fellow tenkara enthusiasts!

One personal highlight was to have lunch with Craig Mathews and Yvon Chouinard. Those two were the reason I got started with tenkara so it was a special treat to spend time with them both at the summit.

Dr. Ishigaki showed his tenkara chops during an on-stream demonstration.

gearing up for some fishing

Watching Japan’s Tenkara King put a tenkara rod through it’s paces was fascinating. It was also reassuring to see that my on tenkara technique was not so bad.

Tenkara King does his thing 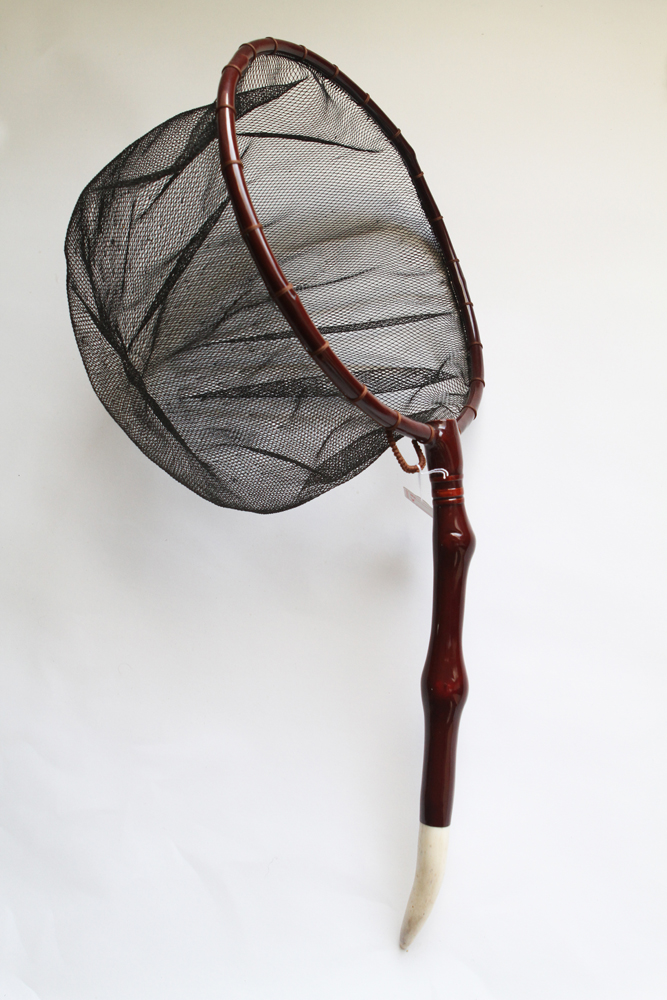 This was going to be a well crafted post about the outstanding fishing trip I had with my good friend Chris Hunt who writes the ever informative and very entertaining Eat More Brook Trout. But that will have to wait.

The tsunami that struck Japan continues to leave havoc in its wake. Half a world away, the connection to fly-fishing may seem tenuous at best.

But tenkara has deep roots in Japan. And tenkara fishers can’t help but look to Japan for tenaka inspiration, instruction and traditions.

Daniel Galhardo, owner of TenkaraUSA, has very strong ties to Japan and while thankfully the tragedy has not directly effected his family or friends those connections have inspired his to help with the relief efforts.

UPDATE: the Auction has closed and it netted more than $900 for Japan relief efftorts!