As the proud owner of more than a half a dozen pairs of Mountain Khakis, I have nothing but good things to say about them.

Here in the mountain brook trout streams in and around the Shenandoah Valley we “wet wade” a whole lot more then we wear waders. Naturally when I saw Mountain Khaki’s, had fishing pants I had to try a pair.

It didn’t take long before I was giving them a workout all over the Valley both on the streams and off. What I didn’t anticipate at the time was the prospect of having to spend 20 hours in an airplane.

I had been invited by the government of New South Wales to give a presentation on fish habitat conservation activity in the United States. Naturedly I was honored by the invitation and thrilled by the prospect of seeing Australia.

What I was not thrilled about was the idea of a nearly six-hour flight to Los Angeles and then a 15-hour flight to Sydney in coach. I have traveled enough to know that airline travel has pretty much descended to the realm of a barely tolerable necessity. How the heck was I going to stay comfortable and presentable at the same time?

Cue the light bulb…Hey those MK Granite Creek Pants might just be the ticket!

So after a six-hour leg from Dulles to LAX and a 17 and a half-hour leg from LAX to Sydney and a return performance two weeks later I can attest to their comfort. For you guys let me just say that means you are not suffering from that constant “adjustment” imperative that comes from sitting (or in this case trying to sleep) for long periods of time, if you know what I mean and I think you do.

We arrived in Sydney in the early morning the next day. The pants were  presentable, even if I wasn’t, as we made are way through immigration, baggage claim and customs. We then drove down the south coast sight seeing as we went along.

There are a lot of features that make the Granite Creeks really great for travel, especially foreign travel. Things like quick drying, wicking fabric, plenty of pockets, three with zippers for extra security, all neatly arranged for use not fashion and my favorite, the little extra loop in the belt loop the is perfect for carabineer key ring.
It is really nice to know that when I have to travel then my favorite fishing pants can do double duty in style. You can go to the MK website and check all the features out.
Of course now I am back to standing in a mountain stream in my Granite Creeks without wallet, passport, keys, cell phone or plane ticket anywhere near by. This week they got back to back workouts on the Rapidan.

Because I think things that work well deserve to be promoted, I contacted MK about their ambassador program. I was delighted when they accepted me. They didn’t ask me or pay me to write this, but did send me a nice pair of Alpine Utility Shorts to try out.

I quickly embarrassed myself by going to get the mail with the sticker still on my butt. Pretty smooth huh? 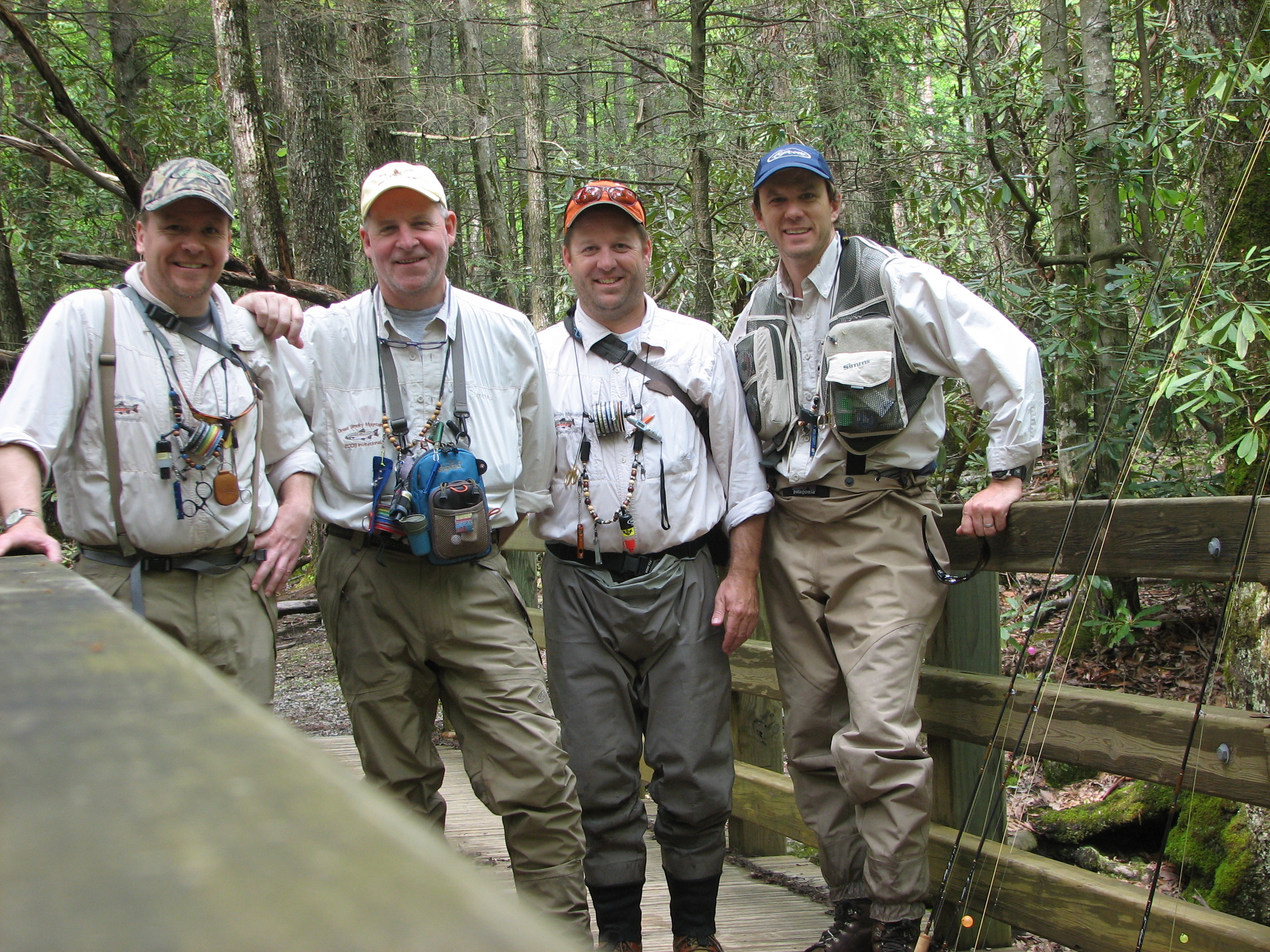 A couple of weeks ago I was in Tennessee on a fishing trip with three of my best friends. This was the second trip we have taken together as a group. Like last year, we spent four days fishing for trout in the Great Smoky Mountains National Park.

The park is only about a five and a half hour drive south of here and contains over 700 miles of wild trout streams. The terrain features and watershed are not that different than what you find here in the Valley in the George Washington National Forest or the Shenandoah National Park.

What is different is the variety of trout you can fish for. All the trout in the Great Smoky Mountains National Park are wild. They stopped stocking in the early 1970’s. You can fish for rainbows, browns and brookies there.

This year, like last, we started our trip at Little River Outfitters, Byron and Paula Begley’s shop in Townsend.

I have been in many shops over the years and this is one of the best. Not only do they have the gear you need, they have the local knowledge. Most importantly they share that knowledge willingly. If you decide to head down that way you really should check in with them.

What I really enjoy about the GSMNP is fishing for rainbow trout in the mountain streams. Rainbows, like brookies, are quick to take a well-presented dry fly. Catching these acrobatic fish in fast-moving mountain streams is a thrill.

According to the folks at Little River Outfitters “Rainbows are found at almost every elevation in the Smokies with the exception of some high elevation brook trout streams. Rainbow trout generally average in size from 4″ to 10″ and on rare occasions up to 14″”.

On this trip we spent a lot of time dodging the rain so most of the fish we caught were on nymphs tied behind a dry fly. Little yellow stoneflies, March Browns and light Cahill’s seemed to be the most prominent. We started to see a few sulfurs come off as well.

We stuck with pretty standard nymph patterns, pheasant tails, copper john’s and gold-ribbed hare’s ears. My “go to” nymph and all-around best producer was the shop-vac.

Last year we had a map marked with prime fishing spots. Our plan had been to fish the same areas again since they had lived up to our expectations last year.

The water levels this trip forced us to seek out new spots to fish. Waters levels were three times the normal flow, blowing out the larger rivers and making even the moderate sized mountain streams dangerous to wade.

Since many of the streams are easily accessible from the roads and trails we were able to look over the map and plan each day’s fishing based on the current or forecast water conditions.

This type of fishing is a bit more challenging than what we had wished for. Last year we had split up into pairs and fished different sections of the streams. With water conditions as treacherous as they were we opted to fish together as a group.

Needless to say this not only allowed us to scout around for potential fishing locations it also gave us a chance to offer each other some good natured “critiques” of each other’s fishing abilities.

Our evening destination was the Little River just up stream from Metcalf Bottoms. This section of the Little River boasts large pools, long runs and lots of pocket water. This is where the big brown trout hang out and we were hoping to find one or two.

Given the water conditions we opted to fish a long run near one of the picnic areas. For three of the four evenings of the trip we swung streamers and nymphs in the swift murky water.

Each evening we were rewarded with a good hatch of mayflies and stoneflies giving us some great fishing to rising browns and rainbows.

The Great Smoky Mountains National Park celebrates its 75th anniversary this year. Fishing is a great way to join in the celebration.