These warnings open Tim Romano’s report, “Bull Moose Sportsmen’s Alliance Event Underscores Critical Link Between Conservation and Jobs” in Angling Trade. I was there, he is right.

The event, “Taking Aim at Conservation: American Sportsmen at a Crossroads Forum” was part of road trip bringing 35 sportsmen and women from  seven states to Washington to unveil the Alliance’s policy agenda and educate Congress on policies and programs  that are important to hunters and anglers in America. As a strong supporter of BMSA I had been asked to participate in a panel discussion during the forum.

The first part was devoted to special guests speakers. We heard remarks for Interior Secretary Ken Salazar, U.S. Senators Jon Tester (D-MT), Mark Udall (D-CO) and U.S. Senator James Risch (R-ID). A common theme from the speakers was the importance of hunting and fishing to the economy. And while that was good to hear there was also an acknowledgement that the fiscal situation and political climate were extremely difficult in Washington.

What I think was a more important part of the forum was a panel discussion about sportsmen and conservation. It was my privilege to share the panel with Kirk Deeter of Field & Stream and Angling Trade fame, Steve Moyer, Trout Unlimited’s VP of Conservation Gary Taylor, Legislative Director for the Association of Fish and Wildlife Agencies, Montana State Senator Kendal Van Dyk, New Mexico State Representative Nate Gentry and Alliance Co-director Gaspar Perricone.

Each panelist was asked to address questions posed by Alliance Co-founder Tim Mauck. What emerged from the responses was a clear sense that the lack of conservation funding and the attacks on conservation and environmental policies were not only an imminent threat to fish and wildlife but also a threat to the economic contribution made by the outdoor recreation industry.

“It’s time that many Americans, particularly those who draw their livelihoods from the outdoors industry realize that our nation’s “conservation deficit” is just as real and just as much a burden for future generations as any financial budget deficit,” said Deeter.

For those of us who cherish hunting and fishing and especially those of us who work in the outdoor recreation industry the message is clear. Ignore these warnings at your economic peril.

It is time to add your name to the list of folks who are willing to speak out in support of a simple equation; conservation of habitat creates recreational opportunity and that means economic activity and jobs.

Hal Herring posed an interesting question a few days ago on Field and Stream’s The Conservationist blog. Herring asked “Are There Any Politicians That Really Understand Sportsmens’ Concerns?”

Herring starts off by looking at the reaction to the recent announcement by the Department of Interior regarding the Bureau of Land Management’s new guidance on wilderness. I covered that subject and won’t belabor the point. It will be interesting however to read the comments to Herrings post in context of my post.

So are there any politicians that really understand sportsmens’ concerns?

This is a highly subjective question. Politician is a broad moniker. In this case I am going to refine my search to elected federal officials. I will further refine it to those officials I have had first-hand experience with either directly or with staff.

Here is my list of favorites off the top of my head:

Rep. John Dingell (D-MI) Unquestionably the dean of sportsmen legislators in the US Congress.

President Obama (I have not dealt directly with him but he tried fly-fishing and has surrounded himself with some excellent Cabinet members – Salazar and Vilsack being notable – appointed officials and staff.)

These officials are not always on the side of sportsmen but by and large, they have better understanding of and appreciation for sportsmen’s concerns then many of their colleagues.

Understanding our issues but not us

There are certainly many more who understand the issues that sportsmen are concerned about but are not necessarily looking at those concerns from a sportsmen’s perspective. This is a real challenge for the sportsmen’s community. We need to do a better job of establishing our relevancy. For those of you who have read this far and know me, here comes my economics refrain.

According to the American Sportfishing Association “60 million anglers generate over $45 billion in retail sales with a $125 billion impact on the nation’s economy creating employment for over one million people.

In 2008, $720 million of these excise taxes were distributed for fisheries management and recreational boating enhancement. In addition, fishing license sales generated $600 million in revenue for state fish and wildlife agencies.”

According to the National Shooting Sports Foundation “Sportsmen contribute $7.5-plus million every day, adding more than $2.7 billion every year for conservation. Hunters and shooters have paid $5.93 billion in excise taxes since the inception of the Pittman-Robertson Act in 1937. Hunting in America is big business, generating 600,000 jobs in the United States. For more than 80 years, sportsmen have paid more than $12.1 billion for on-the-ground projects in every state, protecting our natural environment and our fish and wildlife. The $4.95 billion in annual federal tax money generated by hunters’ spending could cover the annual paychecks of 150,000 U.S. Army Sergeants.”

The economics message is pretty simple.  Conservation creates recreational opportunity and that leads to economic activity. There are plenty of facts and figures to back the message up and more are on the way.

Secretary Salazar made the point in his announcement on BLM’s wild lands guidance.

“The wild backcountry here in Colorado, and across the West, is also a huge economic engine for local communities. Outfitters, guides, hotels, restaurants, and retailers like this one all have a stake in the protection of America’s great outdoors.

We need to do a much better job of educating our elected officials on the significant impact fishing and hunting have on our economy, not just in habitat protection, but in the ripple effect it has for local economies. Now more than ever this simple economic message needs to be delivered to as often as possible.

Here is the schedule for Buccaneers and Bones: 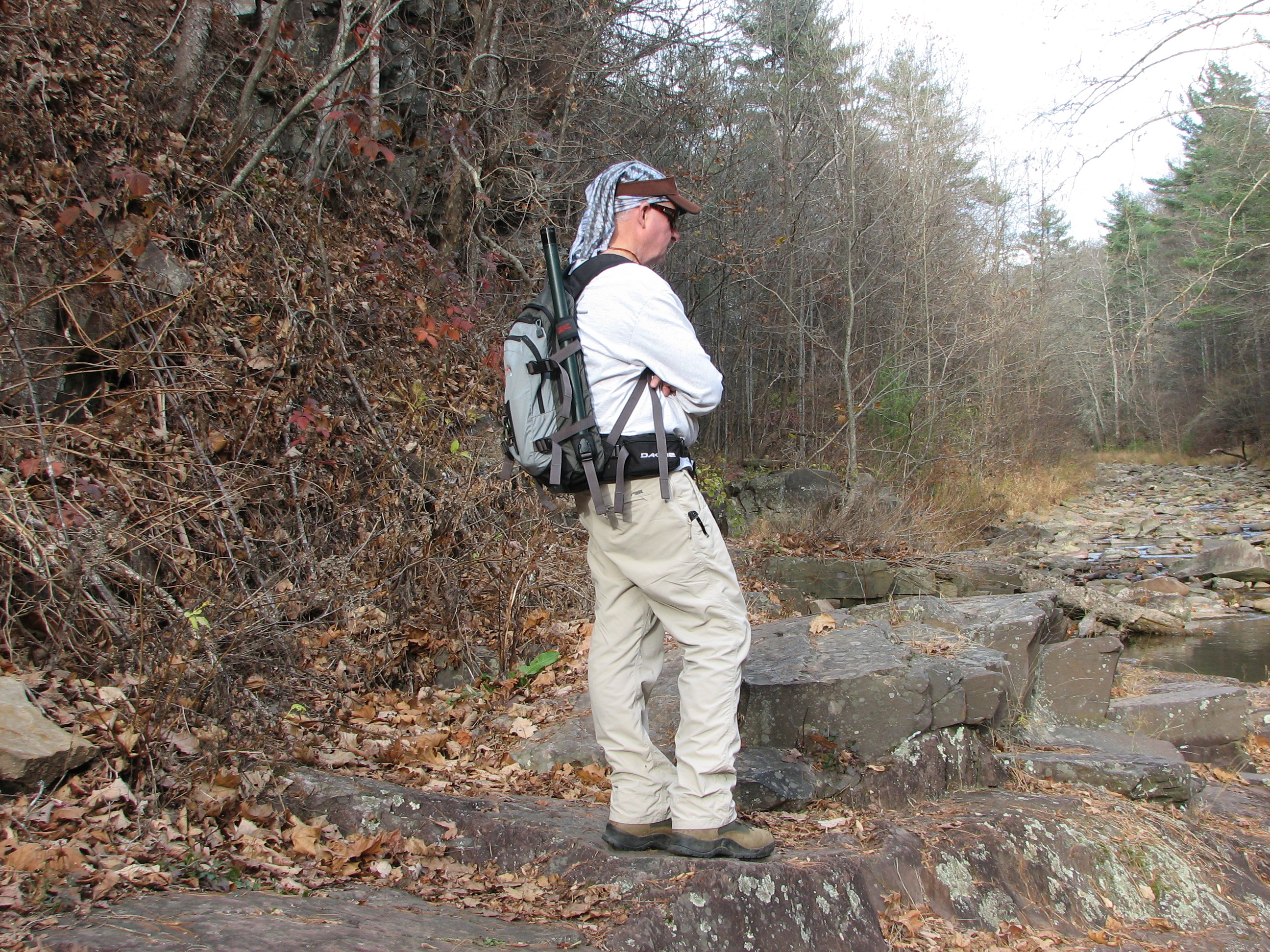 It is not always the best time for fishing, at least in the mountain streams here in Virginia. The water levels can be iffy and more importantly the brook trout are going about their biological imperative. Don’t want to upset that apple cart!

So with time on my hands I like to go scout out some of my favorite streams or pick a new blue line to investigate.

When I am fishing I tend to get a little tunnel vision. I am looking through the water so hard that I sometimes forget to look around and enjoy the view. I probably know my location on many streams by what the bottom of the stream looks like rather than what the banks or surroundings look like.

Of course I tote my tenkara rod and a few flies. And while I am not looking to fish, if the brookies happen to be rising then I just might decide to float a dry their way. But in the fall I like to just count coup on them.

How to count coup

During the year some of my flies will get the hooks broken at the bend. I keep the Adams’, BWOs or  Wulffs  and use them in the fall. I am not trying to catch the fish, just trying to get them to take the fly.

Kind fun and let’s them get back to the more important business of reproduction.

the things you see when you look around

wishin i was fishin…

Next to water, wolves probably ignite more heated arguments in the west than any other subject.

Hopefully it will lead to a little restraint.
END_OF_DOCUMENT_TOKEN_TO_BE_REPLACED

There is a very provocative and thoughtful discussion on fishing ethics, Catching, but Not Releasing in the New York Times’ Room for Debate. It well worth the read.

Here are the topics and authors.

Causing Pain for Our Pleasure by Lynne Sneddon, fish biologist, University of Liverpool, and

The comments are lengthy on these posts but if the topic intrigues you then the comments offer more grist for that particular mill.
[tweetthis]