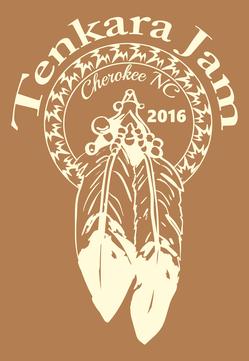 Tenkara anglers and those interested in tenkara it is time again to “Jam on it!”

This is the third year of the “Jam” and it is shaping up to be the best ever and a worthy successor to previous tenkara summits.

The big names in tenkara will be giving presentation and I am fortunate to be included with these notable and knowledgeable tenkara pros. In addition dozens of equipment vendors and organizations will be there to show off products and tell their stories.

As of this writing here are the pros on tap to share their knowledge.

The Tenkara Jam website is loaded with info, here are some quick links:

Click on the links for information about vendors and organizations coming to the 2016 Jam.

Click on the link for bios on the presenters. 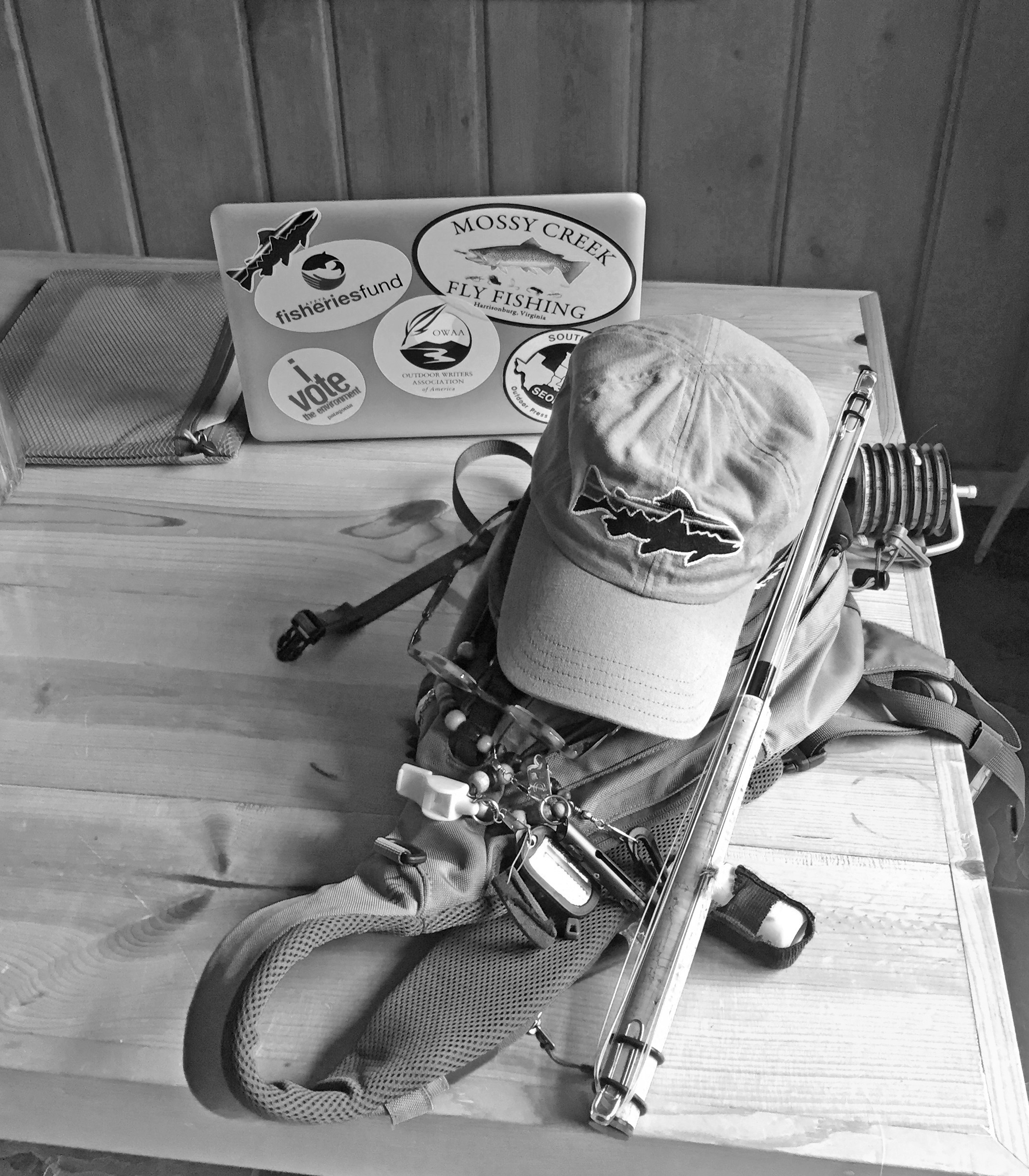 Casting demonstrations are a great way to introduce tenkara. For the last couple of years, I have had the good fortune to do tenkara casting demos at The Fly Fishing Shows in Winston-Salem, North Carolina, Lancaster, Pennsylvania and the Virginia Fly Fishing Festival.

Among the myriad benefits of fishing with a tenkara rod is how easy the rod is to cast. While the fundamental casting principles still apply, the simplicity of the outfit; just a rod and a line, make casting a very simple and intuitive process.

The caster loads the rod using the force of physical energy to build potential energy (bend or “load” the rod) that when released (the rod straightens) becomes kinetic energy transferred to the line, delivering the fly to the target. The weighted line is essential to building the amount of potential energy or load in the rod.

A tenkara rod is a very flexible lever designed to cast a variety of very light lines. The line weight is not the essential element to loading the rod. Just moving your arm or flicking your wrist will load the rod. My rod of choice is a Patagonia 10′ 6″ tenkara rod.

Let’s look at the steps for casting a conventional fly rod.

Now let’s look at the steps for casting a tenkara rod.

The elements of timing, so important in the weighted line system, are not as critical with the tenkara cast because your physical energy controls the loading of the rod. The line plays a much smaller role in making the cast work. This is one of the reasons people enjoy using a tenkara rod. The casting execution is very very simple.

In addition to the above, there are other differences in casting a tenkara rod that contribute to making it easier.

Casting a tenkara rod is not a whole lot different from casting a conventional fly rod. Someone who has mastered casting a conventional rod will understand it in seconds. Most beginners will quickly get the hang of it and spend more time concentrating on fishing rather than casting, and isn’t that the whole point anyway?

Author’s note: A version of this article first appeared in Hatch Magazine. 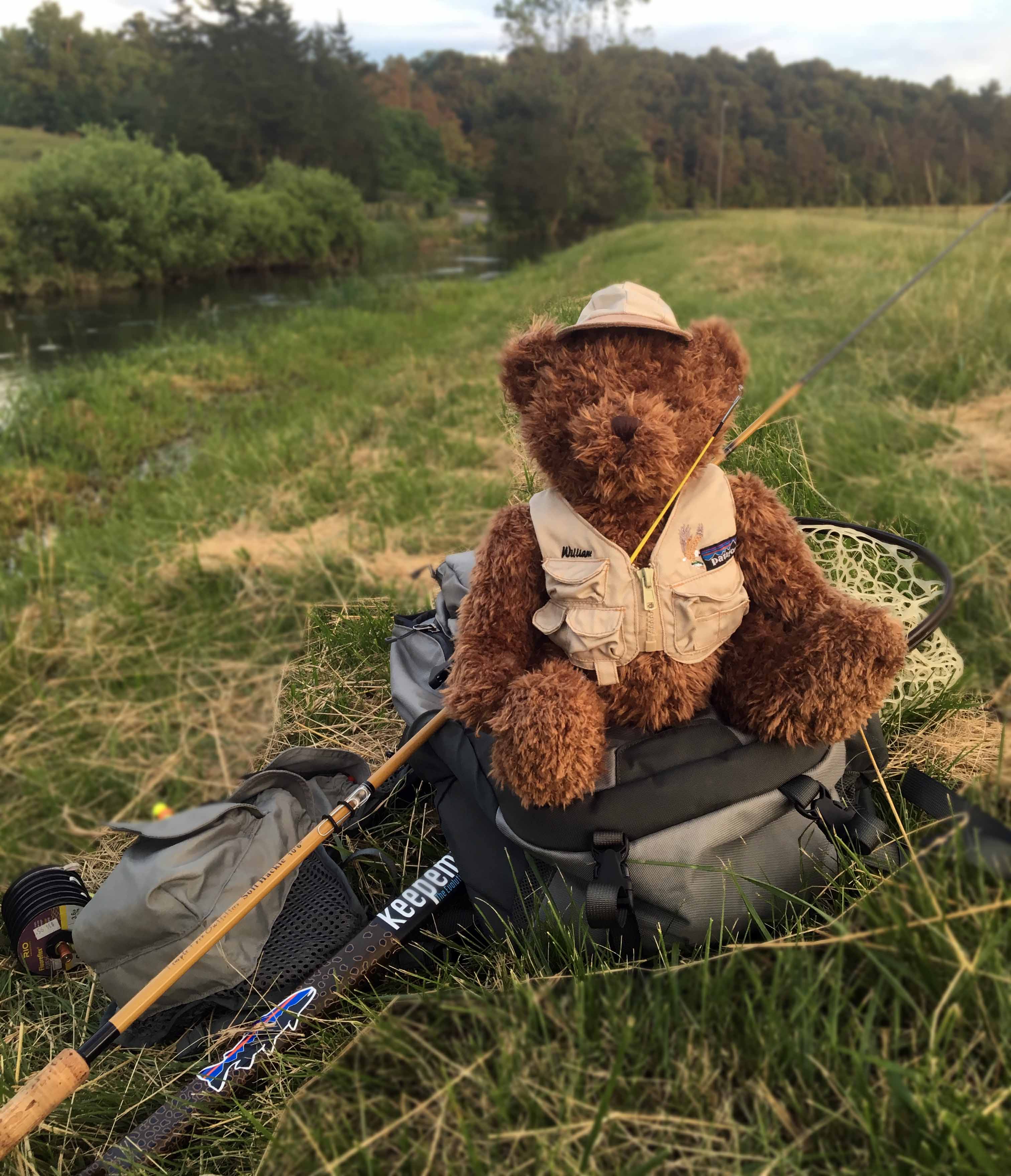 For ten years I have the honor and privilege to teach an outstanding group of women, the Michigan State University Fly Gals, how to fly fish. In the spaces between learning to fish we talk a lot about conservation and leadership. I am humbled, intimidated and awestruck but the women who participate in the Fly Gals program. They are intelligent, focused, confident and eager to learn. They have pushed or are pushing the knowledge envelope far beyond anything I ever cared to and I learn a great deal from each group. These are entertaining over achievers and that makes it fun, but I know they can smell bullshit a mile away so I have to be prepared to be challenged which is always good for instructors.

This May marked the tenth year we got together and there was a little extra celebration and a wonderful gift.

Willie came to me pretty much as you see here with a small addition.

Willie was an instant hit and has already become an important traveling companion. Folks who stumble across this blog or are Facebook or Instagram connections know that for a time my Mossy Creek Fly Fishing hat was the subject of a travelogue.

Willie is the successor to the hat. 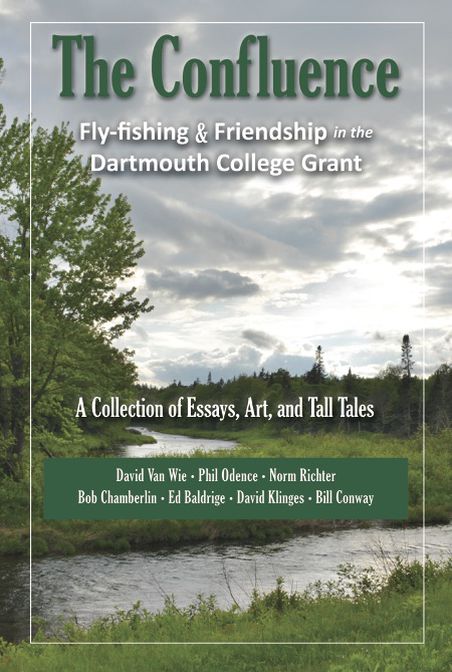 When my friend Bill Conway asked me to read and review a book he had coauthored along with our mutual friend Norm Richter and six other Dartmouth friends, David A. Van Wie, L. Philip Odence, Robert Chamberlin, Edwin Baldrige III, David Klinges I honored and delighted. They have collaborated to bring forth The Confluence, “A collection of essays, art and tall tales about fly-fishing and friendship in the Dartmouth College Grant.”

I can’t say enough good about the thoroughly entertaining collections of stories that make up The Confluence. Suffice it to say this is so much more than a collection of fishing stories. It is a revealing look at friends fishing that span nearly a quarter century. It even has a chapter on tenkara much to my delight.

Each chapter has its own unique point of view and gives the reader a charming glimpse of times afield thoroughly enjoyed. I’ll let you discover the gems and jewels contained in its pages and not spoil the fun. But it delivers something for the novice, the adventurous and the accomplished angler alike.

If you know in your soul that fishing with friends is one of the great joys of fishing and that the experience is enhanced by wild places, then don’t miss the chance to add this book to your library.

The Confluence is scheduled to be released May 3, 2016.

You can keep up with news of the book and the Boys of the Grant on Facebook. 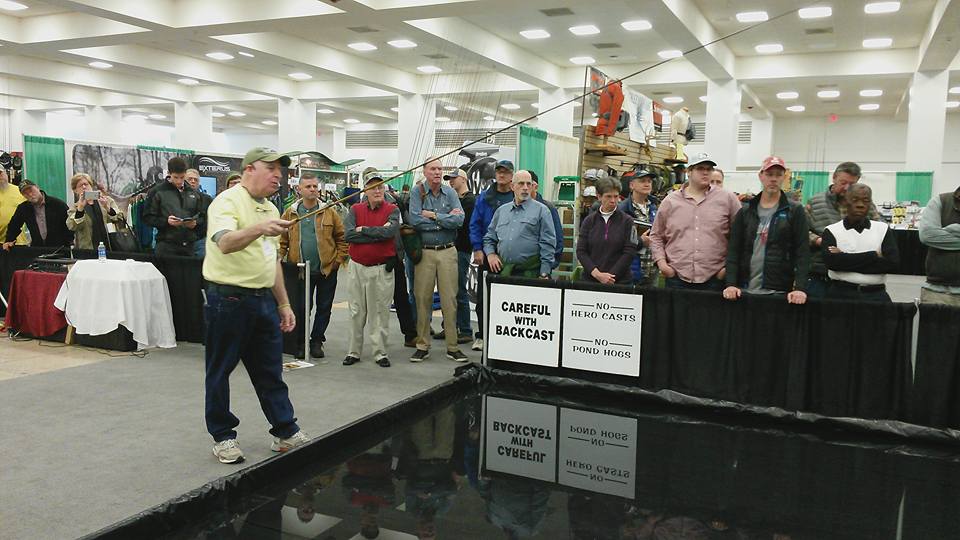 It is show season and I had the chance to do a couple of casting demos and seminars at The Fly Fishing Show in Winston Salem, North Carolina.

As part of the Mossy Creek Fly Fishing crew and a Patagonia Fly Fishing Ambassador it is great opportunity to share how easy and fun tenkara is as a fishing technique.

“The more you know the less you need.” 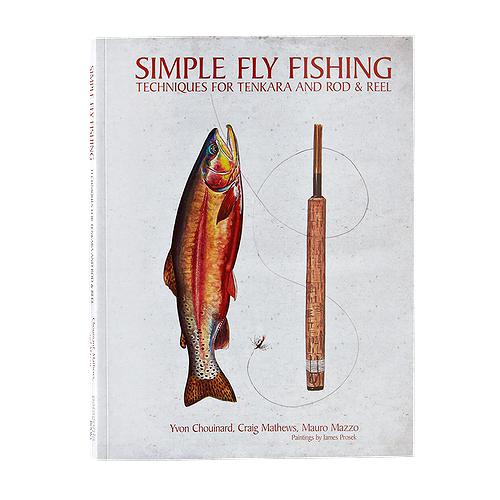 I recently posed this question to a group of fellow tenkara anglers; “If you could share one tip that you think is essential to enjoying tenkara what would it be?”

The responses surprised me but maybe they shouldn’t have. After all, the whole premise behind tenkara is simplicity. The comments essentially broke down into three areas, experience the zen of tenkara, enjoy the simplicity of tenkara rigs and a few great tenkara hacks.

Get in the tenkara ‘zone’
Many anglers focused on the greater ease of focusing on the experience of being out on the water that comes with the tenkara’s inherent lack of clutter.

James Ray wrote, “For me it’s the feeling of Zen, allow yourself to become what you are doing. Leave the world and its problems at the truck, find your inner peace and become one with the fly.”‬‬

“Look all around and be a part of it. Rivers and streams are universes by themselves. Tenkara allows you to keep stealth while fishing. There’s incredible life just a footstep [in front] of you,” wrote Fabrice Golay.

“I have fly fished for 53 years and watched as the sport has become more technical and competitive. Tenkara represents the simpler side of fly-fishing to me. Don’t sweat the details, just fish!‬‬‬‬” wrote John Farmer.

Chris Stewart wrote, “One tip essential to enjoying tenkara: just do it.”

Keep it simple
There are some strong opinions on tenkara definitions, and I won’t go into that here. But common element in many of the responses was the notion of simplicity, the idea of letting the fishing, not the gear, drive the experience.

John Geer wrote, “If you come from a western fly fishing background, tenkara should be very easy to pick up. The most difficult thing may be learning to set up the rod. Make sure you’re very comfortable with that before you get to the water.‬‬‬‬‬‬‬‬‬‬”

“I personally love the versatility tenkara brings to the table. It’s not all about the dead drift, the manipulation of the fly is what changed the way I look at fly-fishing. The Kebari style fly can be manipulated to give it lifelike action in so many ways”, wrote Jesse Spears. “My tip to anybody getting into tenkara is to learn how to use the fly to attract strikes. The pause and drift move, plunging the fly by casting it into water falling into pools to sink the fly, or by hanging your fly in one place and letting it sit on the water are all great ways to catch fish. Pulsing the fly upstream, downstream or across a stream to give the fly life-like action (basically like a steamer) is another must have for your fish catching tool box.”

“My tip: Don’t overcomplicate things. Try to reduce the number of knots, different kinds of line, and use of Western methods”, wrote Adam Klags. Our human brains have a way of wanting to make things more complicated when they don’t have to be. Tenkara is about going back to the older and simpler ways before we overcomplicated fishing mountain streams.

Slow down and think it through. My mistake in fly-fishing was always thinking which line, reel, fly, etc. would work. The simplicity of tenkara took that out of the equation for me. My tactics and presentations have improved dramatically.‬‬‬‬”

Bill Harner wrote, “Have fun and don’t over think it. You’ll feel naked the first few times you fish without a reel and a pack full of doo-dads and 37 different patterns and flies. Have a good top water fly (I’m partial to a parachute Adams if there’s a hatch or an elk hair caddis if there isn’t any major action) and a good subsurface fly (small wooly bugger or a killer bug or killer bugger) in 2 sizes and you’ll be having fun in no time.‬‬‬‬‬‬‬‬‬”

Jesse Thomas wrote, “Take it everywhere. It’s gotta be the best keep behind the seat fishing system around. Peer into every piece of water you cross and fish every one you have time for.‬‬‬‬‬‬‬‬‬‬”

“Relax and Fish. It can be as simple or as complicated as you desire…but without much skill you can begin, have fun and catch fish,” wrote Adam Rieger.‬‬‬‬‬‬‬‬‬‬

Have you tried this?
While the core of tenkara is the simple fly-fishing approach, the ability to adapt, modify and innovate is as much a part of tenkara as the fishing itself. In my experience those who tinker tend to lead the way to innovation. That certainly remains true in tenkara.

One of my personal favorites and an always-in-my-vest item are foam ear plugs. They make great temporary replacements for lost tip caps. Don Haynes turned me on to this hack, and it has already come in handy.

Besides losing tip caps, having the butt cap come loose and disappear can lead to multiple obvious problems. I haven’t seen a good in-the-field solution, although the foam plugs might be a quick fix, so be sure you tighten them early and often.

Dennis Vander Houwen sent me one of his rainbow color variegated furled lines on a cool looking spool, and I have been looking for them since. It was Bill Hobson’s comments that pointed me toward Bob-eez, No-Tangle Thread Bobbins from Bead Smith.

If you use multiple lines, these spools are a great way to carry them and organize them. I use the 2 ½ inch size for my lines and write the line length on the spool.

“These are the spools I got on Amazon. I use them for lines too because, unlike other spools, they don’t unravel,” wrote Hobson.‬‬‬

The takeaway
I’ll quote Yvon Chouinard; “I believe the way toward mastery of any endeavor is to work toward simplicity; replace complex technology with knowledge, hard work and skill.”